Some of the Most Beautiful Temples of the World !!

Some of the Most Beautiful Temples of the World !!

Here is a listing of some of the beautiful temples of the World !!
It Includes the Harmandir Sahib in Amritsar, Taktshang in Bhutan, Wat Rong Khun in Thailand, Prambanan in Indonesia, Shwedagon Pagoda in Burma, Temple of Heaven in Beijing, Chion-in in Japan, Sri Ranganathaswamy Temple in Tamil Nadu & the Angkor Wat in Cambodia. 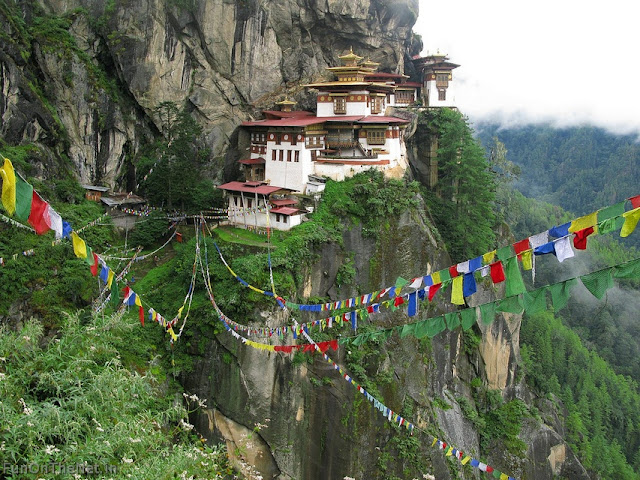 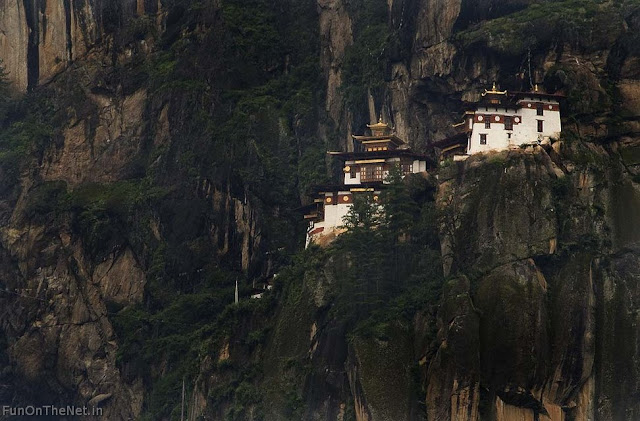 Taktshang is the most famous of monasteries in Bhutan.
It hangs on a cliff at 3,120 metres (10,200 feet), some 700 meters (2,300 feet) above the bottom of Paro valley, some 10 km from the district town of Paro.
Famous visitors include Shabdrung Ngawang Namgyal in the 17th century and Milarepa.
The name means "Tiger's nest", the legend being that Padmasambhava (Guru Rinpoche) flew there on the back of a tiger.
The monastery includes seven temples which can all be visited.
The monastery suffered several blazes and is a recent restoration.
Climbing to the monastery is on foot or mule.
Wat Rong Khun 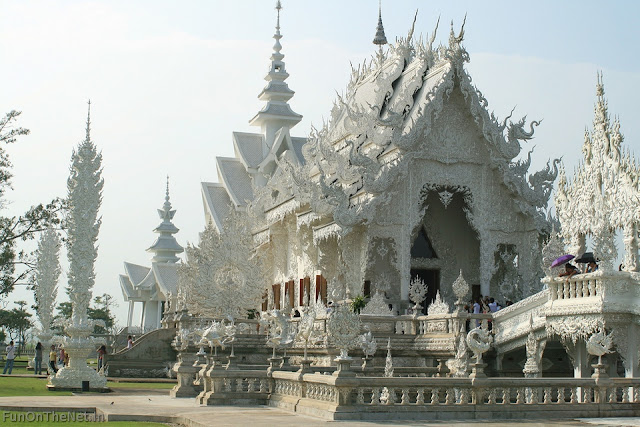 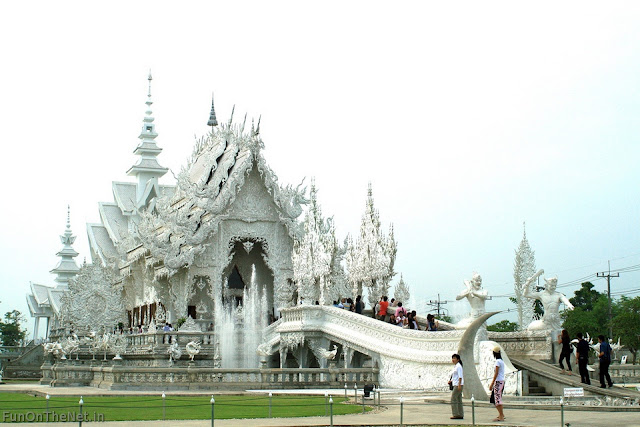 Wat Rong Khun is a contemporary unconventional buddhist temple in Chiang Rai, Thailand.
It was designed by Chalermchai Kositpipat. Construction began in 1998 and is expected to end in 2008.
Wat Rong Khun is different from any other temple in Thailand, as its ubosot (Pali: uposatha; consecrated assembly hall) is designed in white color with some use of white glass.
The white color stands for Lord Buddha’s purity; the white glass stands for Lord Buddha’s wisdom that "shines brightly all over the Earth and the Universe."
Prambanan 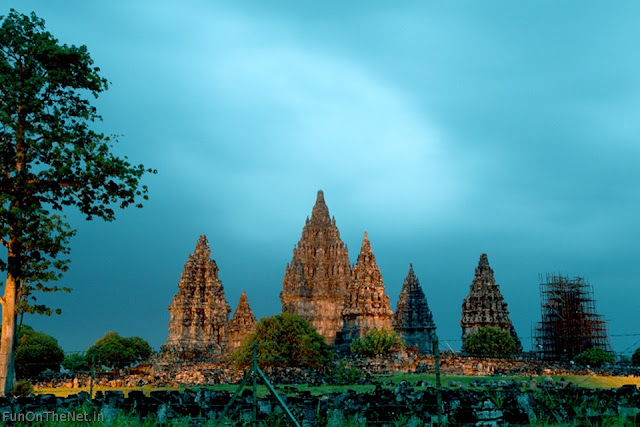 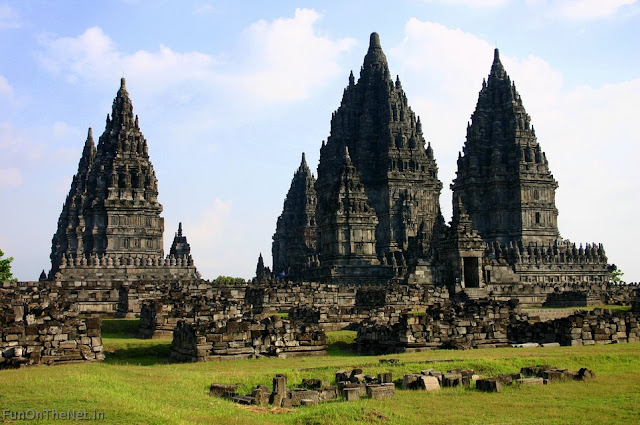 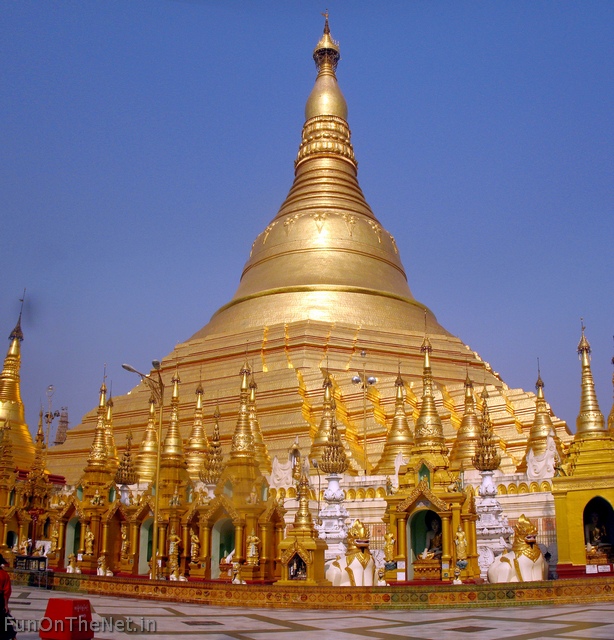 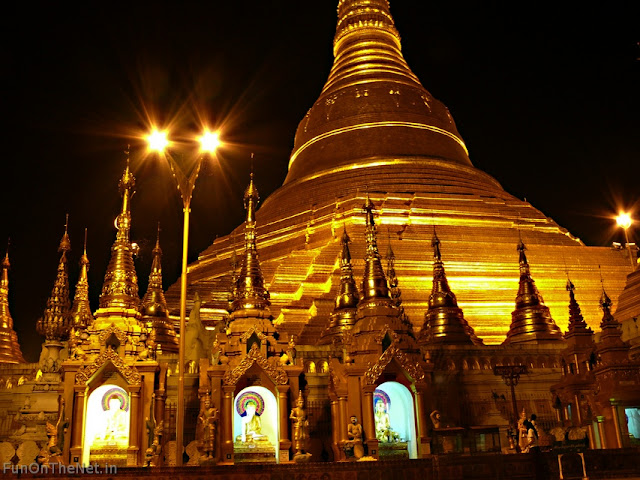 The Shwedagon Pagoda also known as the Golden Pagoda, is a 98-metre (approx. 321.5 feet) gilded stupa located in Yangon, Burma.
The pagoda lies to the west of Kandawgyi Lake, on Singuttara Hill, thus dominating the skyline of the city.
It is the most sacred Buddhist pagoda for the Burmese with relics of the past four Buddhas enshrined within, namely the staff of Kakusandha, the water filter of Konagamana, a piece of the robe of Kassapa and eight hairs of Gautama, the historical Buddha.
Temple of Heaven 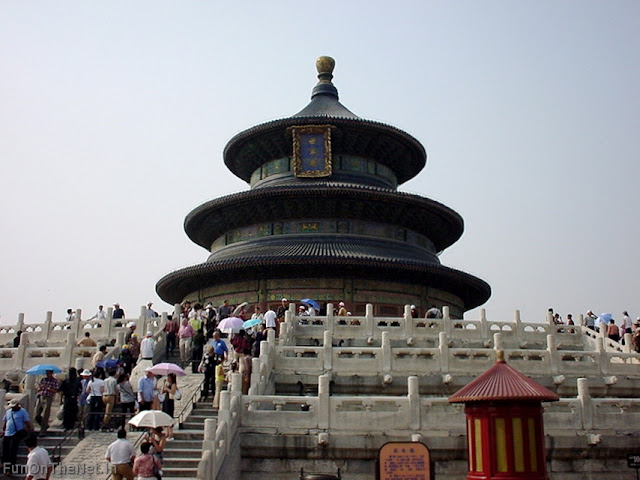 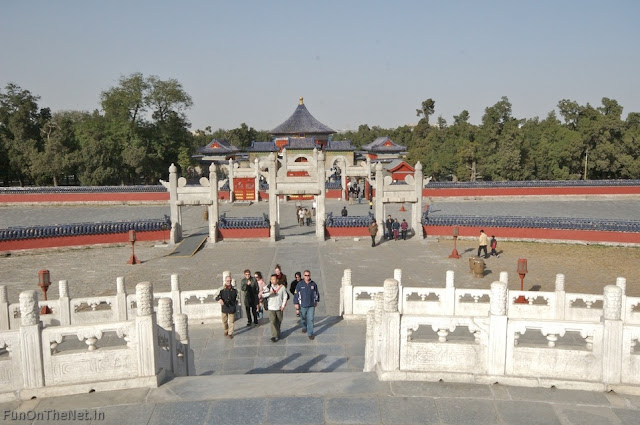 The Temple of Heaven, literally the Altar of Heaven is a complex of Taoist buildings situated in southeastern urban Beijing, in Xuanwu District.
The complex was visited by the Emperors of the Ming and Qing dynasties for annual ceremonies of prayer to Heaven for good harvest.
It is regarded as a Taoist temple, although Chinese Heaven worship, especially by the reigning monarch of the day, pre-dates Taoism.
Chion-in 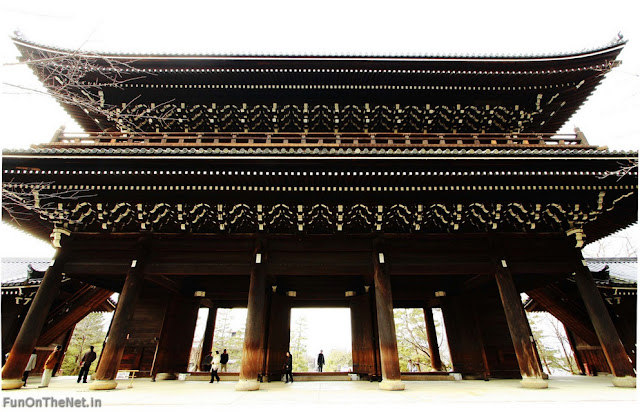 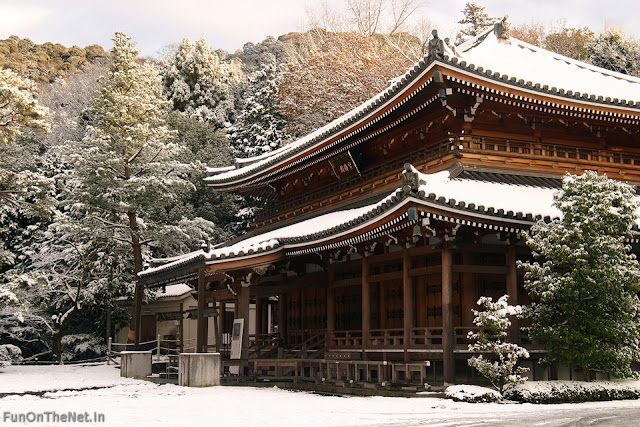 Chion'in Temple in Higashiyama-ku, Kyoto, Japan is the headquarters of the Jodo Shu (Pure Land Sect) founded by Honen (1133-1212), who proclaimed that sentient beings are reborn in Amida Buddha's Western Paradise (Pure Land) by reciting the nembutsu, Amida Buddha's name.
The vast compounds of Chion-in include the site where Honen settled to disseminate his teachings and the site where he died.
Harmandir Sahib 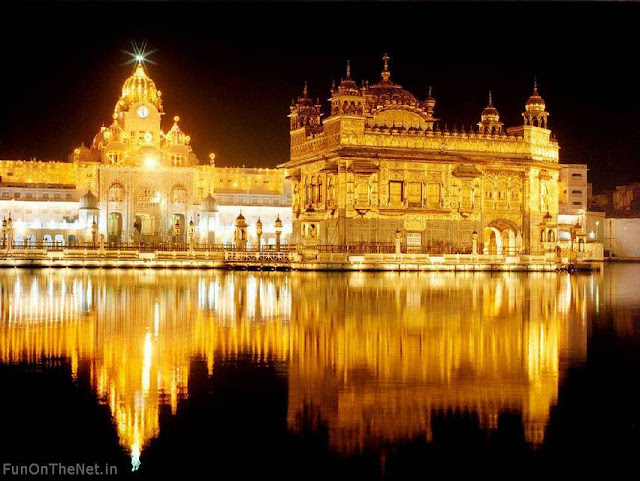 Sri Harmandir Sahib or Darbar Sahib, informally referred to as The Golden Temple or Temple of God, is culturally the most significant place of worship of the Sikhs and one of the oldest Sikh gurdwaras.
It is located in the city of Amritsar, which was established by Guru Ram Das, the fourth guru of the Sikhs and the city that it was built in, is also due to the shrine, known as "Guru Di Nagri" meaning city of the Sikh Guru.
Sri Ranganathaswamy Temple
(Srirangam) 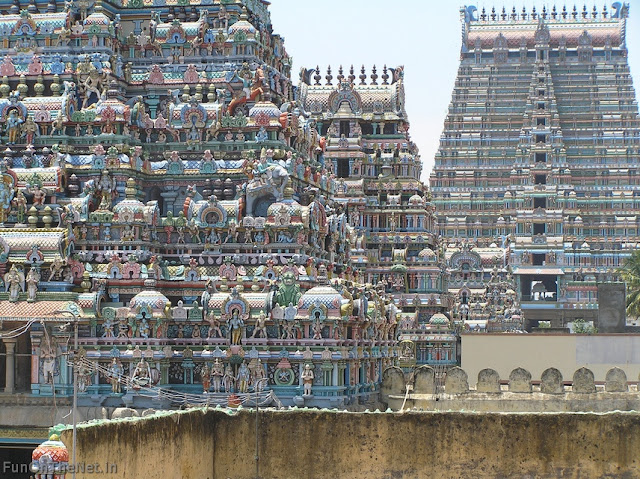 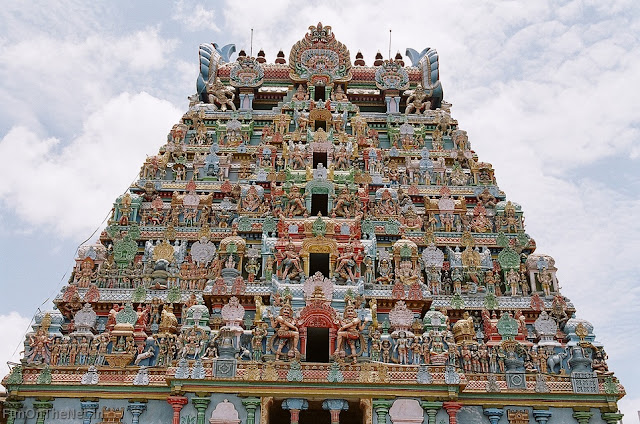 The temple occupies an area of 156 acres (6,31,000 m²) with a perimeter of 1,116m (10,710 feet) making it the largest temple in India and one of the largest religious complexes in the world.
In fact, Srirangam temple can be easily termed as the largest functioning Hindu temple in the world (Angkor Wat being the largest non-functioning temple).
The temple is enclosed by 7 concentric walls with a total length of 32,592 feet or over six miles.
These walls are enclosed by 21 Gopurams (Towers).
Among the marvels of the temple is a "hall of 1000 pillars" (actually 953).
Angkor Wat 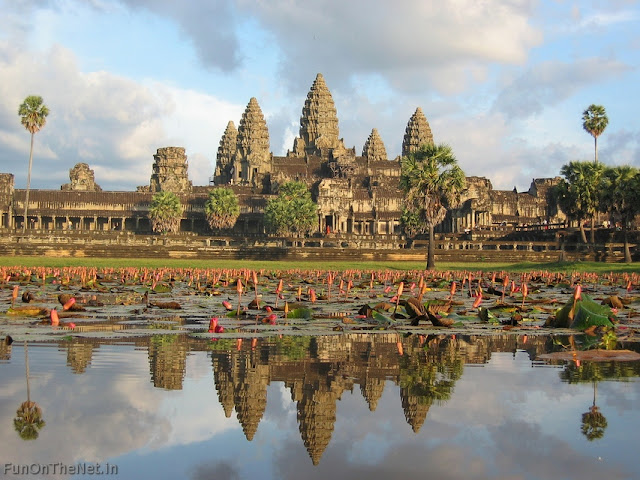 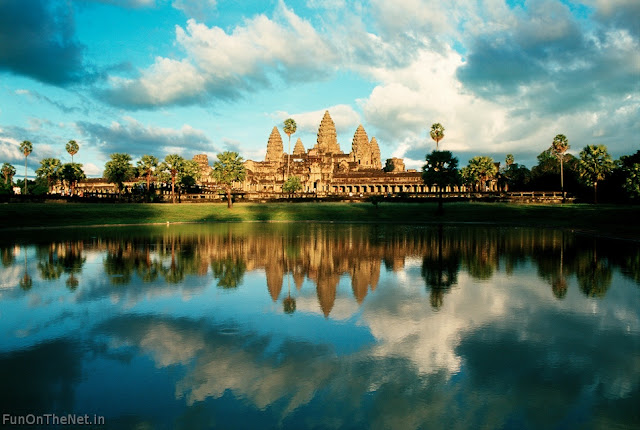 Angkor Wat (or Angkor Vat), is a temple complex at Angkor, Cambodia, built for King Suryavarman II in the early 12th century as his state temple and capital city.
As the best-preserved temple at the site, it is the only one to have remained a significant religious centre since its foundation—first Hindu, dedicated to Vishnu, then Buddhist.
The temple is the epitome of the high classical style of Khmer architecture.
It has become a symbol of Cambodia, appearing on its national flag, and it is the country's prime attraction for visitors.

PLANT TREES TO SAVE ENVIRONMENT.

VISIT BLOG &FWD TO YOUR FRIENDS
GO THROUGH THE I LAND POSTS
ramajayam.rediffiland.comramajayamgomati.blogspot.com

RAMNATH
Posted by Ramajayam at 7:13 AM No comments:

Posted by Ramajayam at 10:13 AM No comments: