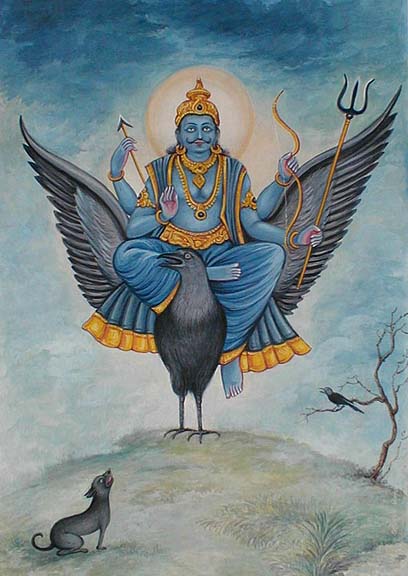 Shani Jayanti is considered to be the day on which Lord Shani was born or appeared on earth. This day is also known as Shanishchara Jayanti or Sani Jayanthi.

Shani Jayanti or Sani Jayanthi is observed on Amavasya (New moon day) in Vaishakh month or Vaisakha masam. This day is also observed as 'Shani Amavasya'.

Shani Jayanthi celebrates the birthday of Lord Shani or Sani. One amongthe Navagrahas, Shani (Saturn) is dreaded by those people who believein astrology as it is considered that Sani can create havoc in theirlife. In 2012, the date of Shani Jayanti is May 20.

Shani yagya or homa is conducted on this day by those people who havethe Saturn cycle or Sani cycle or Sade sathi in their horoscope. Manybelieve that Saturn cycle can be a reason for the bad patch in theirlife. Pacifying Sani or obtaining Shani shanti is the desired resultfrom such pujas.
In Hinduism, Lord Shani is the son of Surya (Sun God) and his wifeChaya. He is also the god worshipped on Saturday or Shanivar.

It is believed that Hanuman devotees are not affected by the pranks ofShani and therefore many people worship Hanuman on Saturdays.

Visiting Navagraha shrines, Sani temples or temples of Lord Ganesha onthe day is considered auspicious. Some people also observe a fast onthe day and the method followed is the same as that of Shanivar Vrat.

What to Do on Shani Jayanti

On this very day, people do out of the ordinary prayers at Navagraha Temples or in Shani Temples. Visit to temples of Lord Ganesha is also considered very fortunate. Shani Jayanti is celebrated with extreme dedication in many temples like Mandapalli Mandeshwara Swamy Temple, Sri Kalahasti Navagraha Temple, Wargal Shaneeshwara Temple in Medak district of Andhra Pradesh and all Navagraha Temples in Tamil Nadu and Karnataka. In Shani Shingnapur Shaneshwara Mandir, Sani Jayanthi is the most important festival for the duration of which a lot of rituals and rites are performed. You can also get a pooja done at this temple through Atoot.com

Additionally, Several devotees perform fast (upvaas) on the day. The rules of this fast are parallel to Shanivar Vrat (Fast on Saturday). 'Shani Thailabhishekam' and 'Shani Shanti puja' are the most important ceremonies performed during 'Shani Jayanthi', Shani Amavasya, and Shani Trayodashi days.

As 'Shani Dosham' (awful effects from Lord Shanis situation in an individual's horoscope) is well thought-out as an imperative facet in ones future aspects, Shani Puja is a propitious ceremony for believers. Shani yagya or homa is carried out on this day by those people who have the Saturn cycle or Shani cycle, properly known as 'Sade sathi'. A lot of people consider that Saturn cycle can be a cause for the dreadful part of their life. Appeasing Shani or getting hold of 'Shani shanti' is the most wanted consequence from such rituals.

The Shani Mantra to please Lord Shani on the day of Shani Jayanti is given below: