Shani Jayanti is the Birth anniversary of Lord Shani. It falls on Amavasya of Jyeshta month. Lord Shani - the son of Lord Suryadev, rules planet Saturn and weekday Saturday. Shani Amavasya or Shanishchara Jayanti is a highly beneficial day to Worship Shanidev.
In 2014, Shani Jayanti will be celebrated on the amavasya of Jyeshtha month on 28th May. Worshipping Lord Shani has a special significance on this day. Devotees recite matas and stotras to please Lord Shani. As per astrology, Saturn is one of the nine major planets in the solar system. Saturn is a slow moving planet and hence known as Shanishchara.
Legenda have given detailed description on the birth and effects of Saturn in astrology. It is the lord of air and rules the west direction. It is believed that those who worship Lord Shani with dedication and faith on Shani Jayanti attains good results.

As per legends, Saturn is the son of Surya Deva and his wife Chaya. Surya deva was married to Sandhya with whom he had three children, Manu, Yam and Yamuna. Sandhya could not bear the radiance of Sun for long and decided to go, leaving her shadow (chaya) behind in service of Lord Sun. After some time Chaya gave birth to Saturn.

On the occasion of Shani Jayanti, devotees worship Lord Shani and observe fasts with proper rituals. It is believed that donation, charity, puja, path etc made on Shani Jayanti gives relief from all sufferings caused by malefic Saturn. The observer should wake up early in the morning, take bath, greet all the nine planets and establish an idol of Lord Shani made of iron. Bathe the idol with mustard oil, sesame seeds and chant below given shani mantra:
Om Shanishcharya Namah|| ॐ शनिश्चराय नम:।।
After doing puja as per the rituals donate saturn related articles such as black cloth, black urad, black shoes. sesame, iron, mustard oil etc. along with things used in puja.The person observing fast should not eat food and chant shani mantra throughout the day.
Sesame, black pepper, peanut oil, pickle, clove, basil leaf and black salt must be used in the puja. Worshipping Lord Hanuman also pleases Lord Shani.

Huge crowd of devotees can be seen in major Shani temple during Shani Jayanti. They worship Lord Shani with faith and devotion to get relief from the sufferings caused by malefic Saturn. It is believed that Shani is black which is why he is fond of black colour. He is adorned with black clothes. According to hindu scriptures, Lord Shani was born on the amavasya of Jyeshtha month. Since birth he was black in complexion, had long physique, big eyes and long years. He is known as the lord of justice as he is always ready to help people. He gives results as per the karma of a individual. 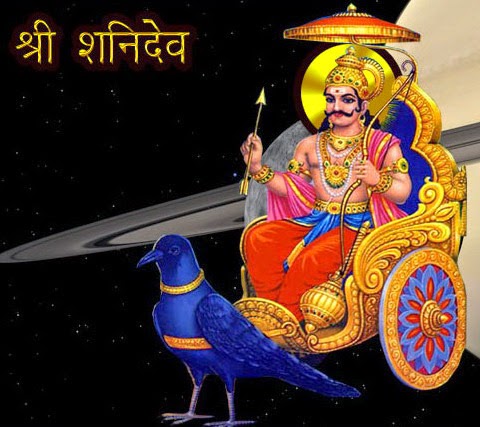 Shani Jayanti celebrates the birth anniversary of Lord Shani. Saneeswara is the son of Lord Surya and is one of the Navagrahas which highly influences human beings. Lord Shani Dev ki Jayanti is observed on Amavasya Tithi during Jyeshtha month (May - June) according to North Indian calendars. However in South India, Shanaishchara Jayanti falls on Amavasya Tithi during Vaishakha month.This year Shani Jayanti date is on 28th May 2014, Wednesday.Special poojas and yajnas are conducted on Lord Shani temples and Navagraha temples during Shani Jayanti. Many devotees take Shani Jayanti vrat by fasting on the day from sunrise to sunset to get blessing of Shanidev. Worshiping Lord Shani on this day will help to reduce malice effects of Sadhe Saati and Pitra Dosha and attain success, wealth and happiness. Shani Shanti Puja and Taila Abhishekam are considered auspicious on Shanishchara Jayanti. 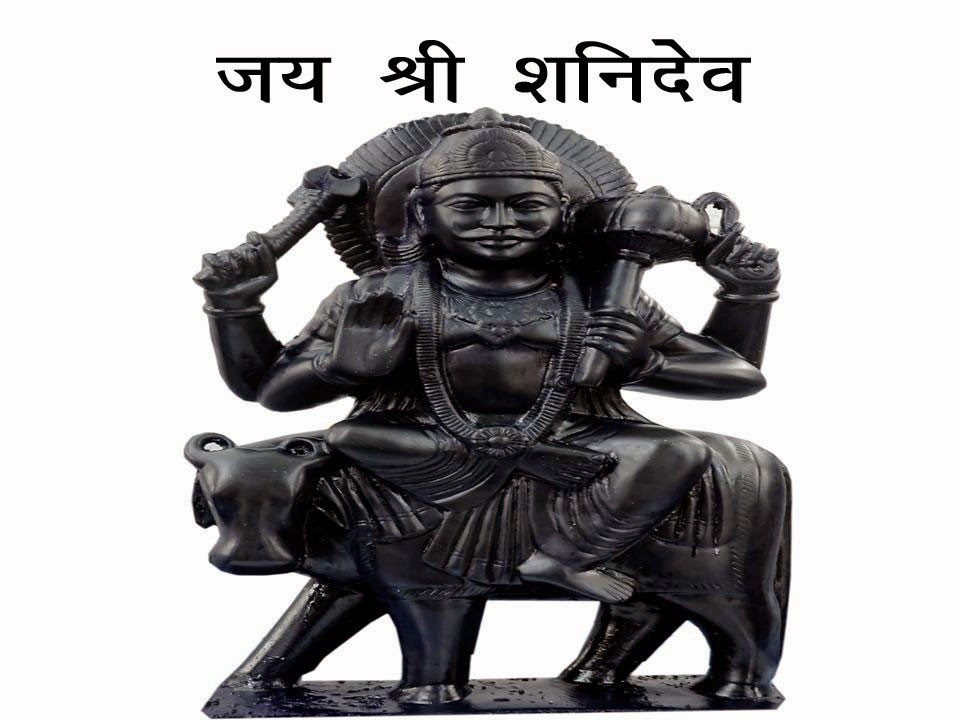 Story: Why you must offer oil to appease Shani Dev?
Once, when Lord Hanuman was offering prayers to his Lord Rama near the Ram setu, Shani Dev crossed by. Hanuman, immersed in his great devotion, didn't see him coming. On this attitude of Hanuman, Shani dev challenged him for a fight. On several refusals, when Shani Dev didn't listened and hold his hand, Hanuman tied him in his tail tightly. Then, he started moving his tail upside down against the stones of the bridge. Shani Dev started bleeding.
When pain became unbearable, Shani Dev requested Hanuman to release him. Hanuman released him on the condition that Shani dev will not cause any malefic effects to Lord Rama's followers & his followers. And, then gave him the mustard oil to apply on his wound to get relief from the pain. Since then, it is customary to offer oil to Shri Shaneshwara to soothen his pain. On offering, Shani dev gets satisfied and blesses his devotees.
Benifits Of Oil Abhishek to Sani Bhagawan on his Birth Day .
1) Get comfort from Shani Dosh!
2) Enhance your personalities -
3) Seek prevention from diseases and reduce ill effects caused due to grah dosh. 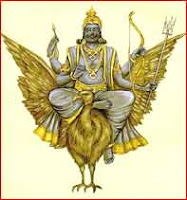 7) SATURNSaturn also known as Shaneeshwara, Shanaischara, Manda, Konastha, Pingala and Souri has blue complexion . He has a golden crown on his head and wears a garland and blue colored apparels. He is seated on the back of the vulture. He possesses a bow, an arrow and a trident in each of his three hands respectively and his fourth hand is raised in the posture of giving boons and blessings.According to Hindu mythology Shani (Saturn) is son of Sun & Chaaya . It is believed that Shani & Sun (Surya Devta) are bitter enemies although they are close relatives. Therefore Shani mantra jaap is done when Sun sets .Yamraj (the lord of death), Dharamraj & Yamuna River are brothers & sister of Shani Maharaj. The 4 Ashwin Kumars (Sons of Surya & Usha) are step brothers of Shani Maharaj.Shani (Saturn) was a great devotee of lord Krishna right from his childhood.Shani is considered as the lord of Justice. Lord Shiva has assigned Shani Maharaj the duty to do justice with each & every individual. Therefore during Shani ki Sadae Saati ( 7.5 years dasha ) & Shani ki Mahadasha ( 19 years dasha ) each individual is rewarded or punished according to his past actions by Shani Maharaj .In every individual’s life there is at least one Shani ki Sadae Saati & one Shani ki Mahadasha . During these dashas the individual must sincerely worship Shani Maharaj at any cost. Even regular worship of Shani Maharaj helps the person to remain healthy & wealthy.The presiding deity of Shani is Lord Brahma. The Pratyadhi deity is Yama.Metal :IRONGem :BLUE SAPPHIREColour :BLUETransition Time :2&1/2 YEARSExalted in Sign : LIBRA UP TO 20 DEGREESMooltrikon : AQUARIUS UP TO 20 DEGREESDebilitation Sign : ARIESMahadasha lasts for : 19Presiding Deity is : BRAHMAElement : AIR ( VAYU )Other names : MAND , SURYAPUTRA , ASITH etc .
Your appreciation

RAMNATH
Posted by Ramajayam at 2:31 AM