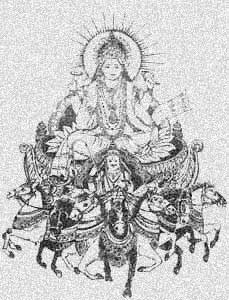 
The great diversity of Indian religious beliefs is projected throughthe various festivals that are celebrated in our country. They arise from the innate desire of man to seek diversion from humdrum activities and they help in symbolising, reflecting and enriching social life in a specific cultural setting.
The festival of Makar Sankrant traditionally coincides with the beginning of the Sun"s northward journey (the UTTARAYAN) when it enters the sign of Makar (the CAPRICORN). It falls on the 14th of January every year according to the Solar Calendar. This day has a very special significance because the day and night on Makar Sankrant are of exactly of equal hours. This day is celebrated as a festival right from the times of the Aryans and is looked upon as the most auspicious day by the Hindus.
The evidence of this festival being lucky is found in our great epic Mahabharat wherein it is told that the great warrior-hero, Bhishma Pitamah  even after being wounded and lying on the bed of arrows, lingered on till Uttarayan set in, to breathe his last. It is believed that the person who dies on this auspicious day of Sankrant escapes the cycle of birth and re-birth and that his soul mingles with the Almighty.
This festival is celebrated differently in different parts of the country yet the use of til that is sesame is found everywhere. Til or sesame seed contain lot of oil and they therefore have a quality of softness in them. Therefore, firstly the use of til in sweets is good for health and secondly being soft their exchange means exchange of love and tender feelings.
In Maharashtra on the Sankranti day people exchange multi-coloured tilguds made from til (sesame seeds) and sugar and til-laddus made from til and jaggery. Til-polis are offered for lunch and these are specialities of Maharashtra. Maharashtrian women are proud of their excellence in preparing these delicacies. While exchanging tilguls as tokens of goodwill people greet each other saying - "til-gul ghya, god god bola" meaning "accept these tilguls and speak sweet words". The under-lying thought in the exchange of tilguls is to forget the past ill-feelings and hostilities and resolve to speak sweetly and remain friends. This is a special day for the women in Maharashtra when married women are invited for a get-together called "Haldi-Kumkoo" and given gifts of any utensil, which the woman of the house purchases on that day. 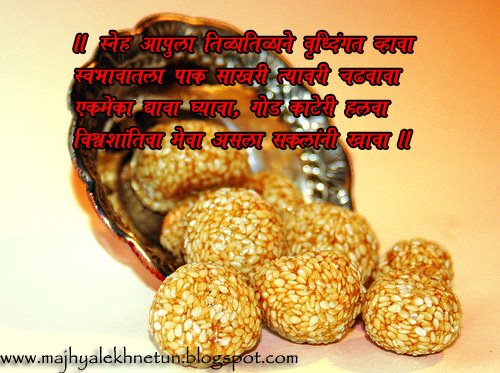 In Gujarat Sankrant is observed more or less in the same manner as in Maharashtra but with a difference that in Gujarat there is a custom of giving gifts to relatives. The elders in the family give gifts to the younger members of the family. The Gujarati Pundits on this auspicious day grant scholarships to students for higher studies in astrology and philosophy. This festival thus help the maintenance of social relationships within the family, caste and community.

In Punjab where December and January are the coldest months of the year  huge bonfires are lit on the eve of Sankrant and which is celebrated as "LOHARI". Sweets, sugarcane and rice are thrown in the bonfires, around which friends and relatives gather together. Thefollowing day, which is Sankrant is celebrated as MAGHI. The Punjabi"s dance their famous Bhangra dance till they get exhausted. Then they sit down and eat the samptions food that is specially prepared for the occasion.

In Bundelkhand and Madhya Pradesh this festival of Sankrant is known by the name "SUKARAT" or "SAKARAT" and is celebrated with great pomp merriment accompanied by lot of sweets.

In South Sankrant is known by the name of "PONGAL", which takes its name from the surging of rice boiled in a pot of milk, and this festival has more significance than even Diwali. It is very popular particularly amongst farmers. Rice and pulses cooked together in ghee and milk is offered to the family deity after the ritual worship. In essence in the South this Sankrant is a"Puja" (worship) for the Sun God. 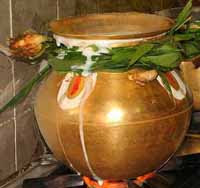 In Uttar Pradesh, Sankrant is called "KICHERI".Having bath on this day is regarded as most important. A mass of humanity can be seenbathing in the Sangam at Prayagraj where the rivers Ganga, Jamuna and Saraswathi flow together. At the confluence of these holy rivers every year Kumbh Mela is held for full one month.

In Bengal every year a Mela is held at Ganga Sagar where the river Ganga is believed to have dived into the nether region and vivified the ashes of the sixty thousand ancestors of King Bhagirath. This mela is attended by a large number of pilgrims from East India.

The tribals in our country start their New Year from the day of Sankrant by lighting bonfires, dancing and eating their particular dishes sitting together.The Bhuya tribals of Orissa have their Maghyatra in which small home-made articles are put for sale.
There is also a fair in the Western Ghats at a place called Shabari Mala, where the temple of the Community Goddess is decorated with dazzling lights. The Goddess is worshipped by touchables and un-touchables both and the "bhog" to the Goddess is cooked in the touchables and un-touchables both. These tribals participate in the Mela and enjoy all together as if they belong to one single family. May be therefore, the experts pine that this festival of Makar Sankrant comes to us from those olden times when the caste system did not exist in India as it emphasises or communal harmony. 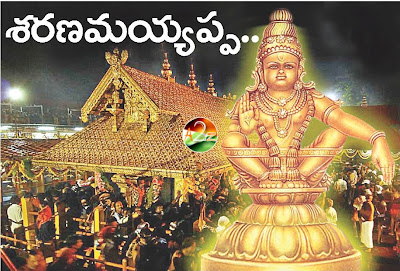 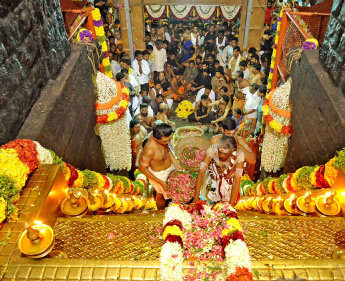 In Karnataka, the festival is marked by visiting one's friends and relatives to exchange greetings, and by the preparation of a dish called Ellu (made with sesame seeds, coconuts, sugar blocks, etc). A common custom found across Karnataka is the exchange of sugarcane pieces and Ellu with one's neighbors, friends and relatives. In Karnataka, Pongal is known as 'Sankranti', and cows and bullocks are gaily decorated and fed 'Pongal'- a sweet preparation of rice. Special prayers are offered. In the evening, the cattle are led out in procession to the beat of drums and music. In the night a bonfire is lit and the animals are made to jump over the fire.
Makar Sankranti is marked by men, women and children wearing colorful clothing; visiting near and dear ones; and exchanging pieces of sugarcane, a mixture of fried til, molasses, pieces of dry coconut, peanuts and fried gram. On this auspicious day, people in Karnataka distribute Yellu and bella (Sesame seeds and Jaggery) and greet with the words " “Ellu bella thindu, Olle Maathu Aadu” (Eat sesame seeds and speak only good). The significance of this exchange is that sweetness should prevail in all the dealings

Thus we see that this festival occupies a significant place in the cultural history of our country and symbolises the victory of ORDER over CHAOS and of Love over Hate.

Hi,Til gud ghya, god god bola
Wish you all a very
happy and prosperous
MAKARSANKRATI
Posted by Ramajayam at 4:07 AM